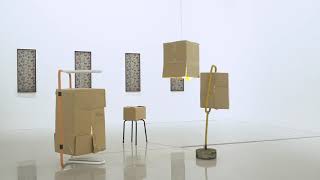 In commemoration of its 100th anniversary, Shiseido Gallery invites Berlin-based duo Jay Chung & Q Takeki Maeda for an exhibition alongside artists of their selection.

Shiseido was established in 1872 in Ginza, Tokyo. The company’s founder, Arinobu Fukuhara, was the first to open a Western-style dispensing pharmacy in Japan during the country’s modernization. Arinobu’s third son, Shinzo Fukuhara, later travelled to the United States to study pharmacology in 1908. He then moved to Europe, where he was introduced to many artists in Paris, such as Léonard Tsuguharu Foujita, by Riichiro Kawashima, a painter friend from his time in the United States. The new understanding of art that Fukuhara acquired in the West would go on to have a significant impact on the aesthetics of Shiseido.

Shiseido Gallery, established by Shinzo Fukuhara in 1919, is said to be the oldest art gallery still operating in Japan. From its founding, the gallery has supported emerging artists by providing a venue in which to present their work. Its first exhibition was of works by Riichiro Kawashima. Kawashima returned to Paris the following year, and the information and various articles he sent back formed a valuable source of Western culture in Japan at that time. Such information was published as “Correspondence from Paris” alongside illustrations in Shiseido Geppo (“Shiseido Monthly,” a company paper for consumers) in 1924. Shiseido Geppo was succeeded by Shiseido Graph in 1933, followed by Hanatsubaki in 1937, with each incarnation providing information on the latest Western trends, fashions, and beauty, as well as serving as cultural reading material.

Since coming together as a duo in 2002, Jay Chung & Q Takeki Maeda have exhibited mainly in Europe and America. The artists, whose work references art history and criticism, garnered attention at exhibitions including Travelers: Stepping into the Unknown in 2018 (commemorating the 40th anniversary of the opening of the National Museum of Art, Osaka), and the Yebisu International Festival for Art & Alternative Visions 2018: “Mapping the Invisible.” They showed Moulting, a slideshow reconfiguring images taken from Shiseido’s printed materials, at their exhibition The Auratic Narrative held at the Kölnischer Kunstverein (Germany) in April this year. In this work, Chung and Maeda—having developed an interest in the role Western aesthetics played in Japan’s modernization—home in on Shiseido’s pioneering efforts of actively embracing Western modern art. The work draws images from Shiseido’s archive of advertisements and the above mentioned publications, focusing on themes such as modern art, fashion, display systems, urban lifestyles, social ideologies, and consumer culture, weaving together a kind of visual poetry.

Surface and Custom is based on the themes taken up by Moulting, comprising works from the following five artists selected by Jay Chung & Q Takeki Maeda: Sara Deraedt, Pierre Leguillon, Klara Lidén, Carissa Rodriguez, and Yuji Takeoka. We hope that you will enjoy this exhibition featuring contemporary artists who reexamine the trajectory of Shiseido’s imagery (as it constructed a unique identity by fusing Western culture with Japanese aesthetics), as well as history and preconceived ideas, and sublimate it into their own art.

Sara Deraedt is concerned with the immediate exhibition situation and intends for the viewer to encounter the piece as it exists in itself. In this exhibition, Deraedt will show a new work.

Pierre Leguillon is the founder and operator of The Museum of Mistakes. His work asks us to reconsider the system by which art is accepted in society. Leguillon frequently uses cloth in his work, and he owns a large collection of Japanese kasuri (fabric woven from dyed thread to create patterns). Leguillon will be showing Mérida (Painting for Sale, by the Meter), paintings created in collaboration with kasuri master Kyozo Shimokawa from the city of Yame in Fukuoka Prefecture, and selling this work during the exhibition.

Klara Lidén employs as her tool of choice the infrastructure and social fabric of the city, using her own body and presence to engage in action within this framework. For her sculptural objects, installations, and spontaneous performative interventions, the artist draws on various resources the city has to offer, such as public garbage cans, ATMs, signs, and fences. Lidén will present a new work for this exhibition, the outcome of a residency in Tokyo.

Carissa Rodriguez, having arrived at art from other places, defines herself as a trespasser in the world of art. Recognizing artistic activity as an occupation, she sees each of her projects as the consolidation of its own internal, external, conscious and unconscious conditions. In doing so, she is ready to move on to the next world at any time. For this exhibition, Rodriguez will be presenting The Maid, a video work premiered at SculptureCenter in New York last year.

Yuji Takeoka began his study of objects as phenomena in the 1970s. Through a process of trial and error he arrived at his “pedestal sculptures,” an artistic form in which pedestals are themselves presented as artworks. Takeoka’s practice continues to depend upon concepts that focus on the space that co-exists with the artwork, such as “spatial presentation” and “spatial disposition.” This exhibition features drawings presented at Takeoka’s first solo exhibition at the Konrad Fischer Galerie in Düsseldorf in 1986.

Born in 1970 in New York, where she currently lives.
A solo exhibition at the Art Institute of Chicago is scheduled for 2020. Her solo exhibition The Maid is on view from 2018 to 2020 (SculptureCenter, New York, MIT List Visual Arts Center, Cambridge, Massachusetts, and Walker Art Center, Minneapolis). Group exhibitions include the Whitney Biennial (Whitney Museum, New York; 2014 and 2019).

Jay Chung & Q Takeki Maeda and participating artists will speak about the exhibition and their work.

The karakusa arabesque patterns designed for Shiseido’s products and advertisements saw the creation of many block copies by printmaker Marehide Susuki. This exhibition will showcase the process through which the Shiseido arabesques were created, with a focus on these original prints.

Shiseido Gallery will be participating in DESIGNART TOKYO 2019, which transmits and shares the significance of creations and concepts that traverse design and art.

Visitors collecting stamps at each of four galleries in Ginza will receive original merchandise based on the number of stamps that they have collected.