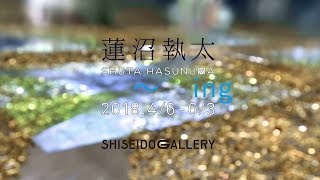 The Shiseido Gallery is pleased to announce a solo exhibition by internationally acclaimed composer and artist Shuta Hasunuma, to be held April 6 (Fri) through June 3 (Sun), 2018.

Hasunuma is known for his engagement in a wide variety of music-related activities, as a composer, producer, collaborator in genres like film, theater and dance, as well as his Hasunuma Philharmonic Orchestra, which presents concerts among musicians from different musical backgrounds. He has also earned high praise for exhibitions and projects as an artist focusing on visual expressions of sound and music and exploring the methods underlying “composition.”

From February 23, Hasunuma has presented Compositions, his first solo show in the United States, at the Pioneer Works in Brooklyn, New York, featuring mainly new works created during his residency there. Hasunuma describes this exhibition as an act of finding points of connection in space between the auditory and the visual. Working with both environmental sounds collected in the field and sounds he’s produced himself, he creates experimental pieces of music, then connects other participants in fluid, dynamic collaborations—conductors connected with musicians, performers with performers, players with audience members—to create music through a distinct collaborative approach, then in the exhibition attempts to express this music in a visual form.

Hasunuma regards the modern era, with its many social issues, as a period of major change, and he also feels that the relationships between human beings and non-human entities (e.g., nature, technology, etc.) are in the process of being questioned. To that end, his starting point is to review the past, which requires reaffirming both his own past 10 years of musical activity and the work of others who’ve influenced him along the way. His suggestion is that placing past and present works in comparative opposition engenders the possibilities of discovering new perspectives from the past as well as creating new perspectives for future works.

This time, through a process based on the concept of identifying points of difference and commonality between past and present, and thereby tracking courses of transformation and change, Hasunuma will present video, sound, sculpture and other works in which he has extracted the key elements of his creative process, namely, fieldwork, collaboration, and phenomena. The exhibition will consider new relationships and coexistences among people, and between humans and non-humans, while at the same time composing works for exhibition to create a singular harmony. He will then attempt to bring all of the sounds existing in the space together into a single piece of music. The exhibition title, “ ~ ing” is a composite of the symbol “ ~ ” representing the relationships connecting things (human beings) and the syllable “ing” representing the progressive form and as a component of the words “thing” and “being.”

Since opening in 1919, the Shiseido Gallery has been actively engaged in “discovering and creating new value,” just one part of Shiseido’s broader corporate mission to “We inspire a life of beauty and culture.” Through music, a medium that has always enriched people’s lives, Shuta Hasunuma is attempting to discover new perspectives on society, and we hope that as he creates his exhibition here at the Shiseido Gallery, where diverse people meet and intersect regardless of age, gender, or nationality, it will serve as a catalyst for all of us to re-appreciate and re-affirm music.

* Shuta Hasunuma has contributed to the in-store background music played at the SHISEIDO THE STORE comprehensive beauty shop opened in January 2018 in a building across the street from the Shiseido Gallery.

Born in 1983 in Tokyo.In addition to releasing his own recordings and organizing and performing with the Shuta Hasunuma Philharmonic Orchestra both in Japan and abroad, he has collaborated in genres across the performing arts, including film, theater, dance, and musical production. Most recently, he has been applying musical composition techniques to a variety of media to present video, sound, sculpture, and installation works in both solo exhibitions and projects. His most recent albums include “2 Tone” (2017), in collaboration with tabla player U-zhaan, and the theater piece “TIME,” recorded at the Kanagawa Arts Theater (KAAT). Hasunuma also planned and organized the “Music Today” concert series. In 2014, he went to the United States on a grant from the Asian Cultural Council. A list of selected solo exhibitions includes: “compositions : rhythm” (2016) at the Spiral Garden in Tokyo; “compositions” in 2017 at the Beijing Culture and Art Center in China, as part of a Japanese Agency for Cultural Affairs cultural exchange; and “Compositions” at New York’s Pioneer Works from February 23 through April 8, 2018.

For this event, the current Hasunuma Philharmonic’s 16 members are joined by 10 new members for a open rehearsal as the “Shuta Hasunuma Full Philharmonic Orchestra,” the first rehearsal toward a summer large-scale symphony performance planned for August 2018.