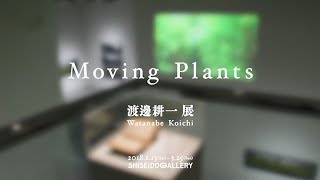 The Shiseido Gallery will be holding “Moving Plants,” an exhibition of works by Koichi Watanabe, from Saturday, January 13, to Sunday, March 25, 2018. Watanabe has been photographing itadori (Japanese knotweed) for over 10 years. This plant, also known as skanpo, is found all over Japan, and has been known throughout history as a medicinal and edible plant. However, few people know that roughly 200 years ago, Philipp Franz von Siebold, who was living in Nagasaki at the time, brought it back from Japan to Europe for use in gardening, and its hardiness has led to its spread throughout the world, reproducing so widely that it is now changing local ecosystems.

Ever since coming across Japanese knotweed while photographing the scenery of Hokkaido, Watanabe has researched the ecology of this weed and travelled far and wide to see it with his own eyes. While consulting reference works, both old and new, from around the world, he has contacted local botanists, delving into the world of this plant in countries such as the UK, the Netherlands, Poland, and the U.S. This exhibition will feature 18 photographic works and two video works from Watanabe’s “Moving Plants” series. Watanabe’s depictions of Japanese knotweed in this project convey these plants, with their profound life force, as possessing a natural, organic beauty despite being highly invasive.

The exhibition features not only photographic works captured by large lensed cameras, but also documentary films of Japanese knotweed in their natural environments around the world, and rare materials used by Watanabe in his research. This exhibition is the first to show the entirety of Watanabe’s Japanese knotweed project, and the giant prints of itadori, as tall as people, fill the entire exhibition area with the strong presence of these plants.

The name “Shiseido” comes from a line in the Chinese Yi Jing, the Book of Changes, which means “Praise the virtues of the Earth, which nurtures new life and brings forth significant values.” In recent years there has been growing interest around the world in this natural life force, and many artworks have focused on the relationships between people and nature or expressed sensitivity to nature.
Japanese knotweed, which came from Japan and was conveyed to the world for use in gardening, and which has spread throughout the world due to its strong life force, is a rare protagonist that seems to have foreshadowed the global networks that have come to pass information between people and things in our modern age. Experience the timeless, universal path Watanabe has depicted of the interfacing between these plants and mankind.

Born in Osaka Prefecture in 1967. Graduated from Osaka City University Graduate School of Literature and Human Sciences with a major in philosophy in 1990. Completed the photography course at Inter Medium Institute in 2000.
Watanabe creates photographic works with plants as their theme. This approach encompasses everything from depictions of scenery which includes plants to the hidden history behind these plants, and the movement of and relationships between people that can be glimpsed through them.
In 2015, he published his first photo collection, “Moving Plants.” In 2017, he participated in a group exhibition in Denmark with the theme of plants as presences which move people and things amidst our modern ecological crisis.