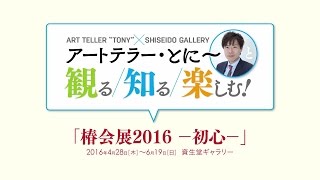 The Shiseido Gallery is pleased to announce the exhibition Tsubaki-kai 2016 —Shoshin (beginner's mind), to run from April 28 (Thu) through June 19th (Sun), 2016. The Tsubaki-kai, an exhibition group formed originally in 1947 and with a membership that has continually changed over the past years, is one of the Shiseido Gallery's most important flagship group exhibitions.

The Seventh Tsubakikai was formed in 2013 by Genpei Akasegawa, Naoya Hatekeyama, Rei Naito, Zon Ito, and Ryoko Aoki, with plans to exhibit together once a year through 2017. The thematic subtitle “Shoshin (beginner's mind)” was chosen with reference to the recovery efforts that followed the 2011 Great Tohoku Earthquake, with the group feeling these invited opportunities to reconsider what it means to “start over” and “begin things anew.” The Shinmeikai Japanese Dictionary defines “shoshin” as “the purity of thought and feeling experienced when first engaging or attempting something.” The Noh master Zeami, in his treatises on art, urged the importance of “never forgetting the beginner's mind” and describes this as a mental stance useful in confronting new experiences of all kinds throughout the various stages of life.
Reflecting the idea of renewal, graphic designer Masayoshi Nakajo has also been recreating and renewing the Tsubaki-kai exhibition logo each year.

This exhibition is the fourth for these participating Tsubaki-kai group. Yasutake Shimaji, a dancer and choreographer, joined the group from the last exhibition, and his membership marks the Tsubaki-kai's first inclusion an artist from the field of dance. For this exhibition he will be presenting works of sculpture (a new medium for him) accompanied by dance perfromances scheduled during the exhibition period. Naoya Hatekeyama, who spent September last year through this February in Mexico as a representative of the Japanese Agency for Cultural Affairs, will present landscape photographs shot during his stay. Rei Naito will continue the “color beginning” painting series she gave title for Tsubaki-kai 2013 exhibition, with new two- and three-dimensional works. Zon Ito will present animations of drawings based on his observations and surveys of insects and other living creatures dwelling in and around Tokyo's Ginza district. Ryoko Aoki will present a “zine” made out of communication with the other Tsubaki-kai members, as well as her own original works. Finally, the works by the late Genpei Akasegawa will be exhibited. This year, we will show pen-and-ink drawings from the 1970s. The Shiseido Gallery invites one and all to come experience this inspiring lineup of newly created and selected works that continue the Tsubaki-kai's exploration of “Shoshin.”

■Reference photos: from the Tsubaki-kai 2015 exhibition