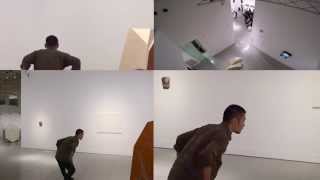 The Seventh Tsubaki-kai was formed in 2013 by five artists, Genpei Akasegawa, Naoya Hatekeyama, Rei Naito, Zon Ito, and Ryoko Aoki. The thematic subtitle “Shoshin” was chosen with the March 11, 2011 disaster in mind. As Japan struggled to recover from the devastation, the members of the newly formed Tsubaki-kai agreed that such a terrible event and the inevitable rebuilding in the aftermath of it invited opportunities to reconsider the mindsets and ideas associated with “starting over” and “beginning things anew.” The Shinmeikai Japanese Dictionary defines “shoshin” as “the purity of thought and feeling experienced when first engaging or attempting something.” In discussing the wisdom underlying his art, the Noh master Zeami urges the artisan to “never forget the beginner’s mind,” a mental stance useful in confronting new experiences throughout the various stages of life.
In keeping with this idea of renewal, graphic designer Masayoshi Nakajo has also been recreating and renewing the Tsubaki-kai exhibition logo each year.

This exhibition is the third for these participating Tsubaki-kai members. Sadly, member Genpei Akasegawa passed away last October, but we nonetheless wished to keep him present in this exhibition by showing some of his past work. This includes a set of illustrated journal entries he published in a magazine from 1985 to 1988, in which he observes the everyday from his own unique perspective, giving us a view of Akasegawa as essayist and illustrator.

To the original artist roster, the Seventh Tsubaki-kai now welcomes a new member, dancer Yasutake Shimaji. Currently based in Frankfurt, Germany, Shimaji is an active member of The Forsythe Company, and during the course of the current Tsubaki-kai exhibition he will be contributing improvisational dance presentations inspired by the Tsubaki-kai works on display at the Shiseido Gallery.

Naoya Hatekeyama will present a series of photographs of giant boulders deposited across Germany by glacial action. Rei Naito will present new pieces in her “color beginning” and “human” series she has continued to exhibit since 2013. Zon Ito will present works of embroidery based on his observations last year of the living creatures dwelling in and around Tokyo’s Ginza district. Ryoko Aoki will present a number of small drawings which she has allowed to come into being through unconscious processes.

With its new member and taking its first steps toward new stages of artistic exploration and expression, this year’s Tsubakikai exhibition is certainly one not to be missed.